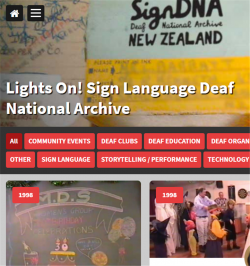 The concept for SignDNA (an abbreviation of Sign Language Deaf National Archive) came while watching old home movies on a kitchen table. We were struck by how powerful it was to see scratchy old films showing people signing. It somehow gave another dimension to NZSL, the dimension of time.

Like other signed languages, NZSL has no written form. While there have been some wonderful histories written in English about the Deaf community (many of which have been used to inform this archive), content in NZSL was a missing from Deaf history. Given that so much about Deaf culture is reflected in sign language, this also meant that cultural history was missing.

A conversation one day with Owen Gibbons (who appears in these videos probably more than any other individual!) revealed that he had several old films in a box stored at home. He agreed to let us get them digitised to see what was on them. When we received them it was soon obvious that time had not been kind to the films and they were sticky and smelled strongly of vinegar – a sure sign of substrate decay. While we researched how to save the film’s contents, it occurred to us that there must be hundreds of similar films out there, all in danger of suffering the same fate. Our Deaf cultural history was literally dissolving in front of our eyes and nothing was being done to preserve it.

This set in motion the development of a project to collect, digitise and preserve these filmed histories. The call went out to donate old films, and slowly but surely the films started arriving. Some had been well preserved, many had not. With the support of Diversityworks Trust, and a successful first fundraising campaign on PledgeMe we raised enough money to start digitising the worst affected by ageing. The PledgeMe success and donations of films also demonstrated community support for the project, which helped with further grants from charitable funding bodies (see our Sponsors page for details).

From there began the long slow process of assessment, logging, digitising, editing, tagging, categorising and uploading of each selected film. It is thanks to many volunteers, the steering group, and years of work by the team at Deafradio that the archive was launched on the 16th May 2015.

We hope you enjoy exploring and rediscovering our history together."