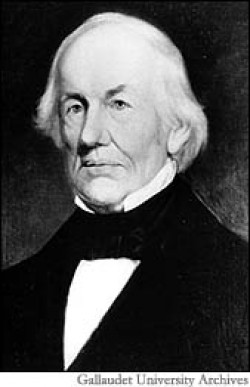 Louis Laurent Marie Clerc (French: [lɔʁɑ̃ klɛʁ]; 26 December 1785 – 18 July 1869) was a French teacher called "The Apostle of the Deaf in America" and was regarded as the most renowned deaf person in American Deaf History. He was taught by Abbe Sicard and deaf educator Jean Massieu, at the Institution Nationale des Sourds-Muets in Paris. With Thomas Hopkins Gallaudet, he co-founded the first school for the deaf in North America, the Asylum for the Education and Instruction of the Deaf and Dumb, on April 15, 1817 in the old Bennet's City Hotel, Hartford, Connecticut. The school was subsequently renamed the American School for the Deaf and in 1821 moved to 139 Main Street, West Hartford. The school remains the oldest existing school for the deaf in North America.