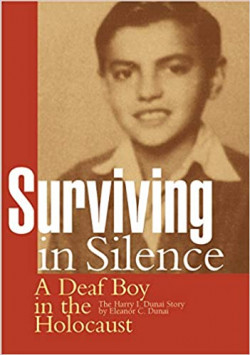 Surviving in Silence: A Deaf Boy in the Holocaust

"Izrael Zachariah Deutsch was born on March 15, 1934, in Komjata, Czechoslovakia. The second youngest child, Izrael lived a bucolic existence with nine brothers and sisters on a farm, differing from them only in that he was deaf.

When he was six, his mother took him to Budapest, Hungary, and enrolled him in a Jewish school for deaf children, where he thrived. Soon, however, the Nazi regime in Germany and the Arrow Cross fascists in Hungary destroyed Izrael’s world forever.

Izrael realized that by being both Jewish and deaf, he faced a double threat of being exported to the gas chambers in Poland. But at every lethal junction, he found a way to survive, first by buying and reselling pastries for extra money that later saved his life in the Budapest ghetto. Still, Izrael was close to death from starvation when he was liberated by Russian soldiers on January 18, 1945.

Izrael survived the war only to learn that his parents and two brothers had been murdered by the Nazis. The rest of his brothers and sisters scattered to distant parts of the world. Forced to remain in Budapest, Izrael finished school and became an accomplished machinist.

He avoided any part in the Hungarian uprising in 1956 so that he could secure a visa to leave for Sweden. From Sweden he traveled throughout Europe and Israel, using an amazing network of Holocaust survivors, relatives, and deaf friends to ease his journey. He finally settled in Los Angeles, where he married a deaf Jewish woman he had met years before. Along the way, he changed his name from Izrael Deutsch to Harry Dunai."