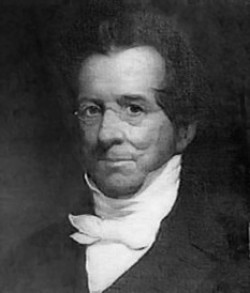 Thomas Hopkins Gallaudet,(December 10, 1787 – September 10, 1851[1]) was an American educator. Along with Laurent Clerc and Mason Cogswell, he co-founded the first permanent institution for the education of the deaf in North America, and he became its first principal. When opened on April 15, 1817, it was called the "Connecticut Asylum (at Hartford) for the Education and Instruction of Deaf and Dumb Persons," but it is now known as the American School for the Deaf.

His path in life was altered when he met Alice Cogswell, on May 25, 1814, the nine-year-old deaf daughter of a neighbor, Dr. Mason Cogswell.[9] Gallaudet had returned to his parents' home in Hartford to recuperate from his seminary studies. On that day, as he observed Alice playing apart from other children, he wanted to teach her. Gallaudet started to teach Alice what different objects were called by writing their names and drawing pictures of them with a stick in the dirt. Dr. Cogswell was impressed and invited Gallaudet to continue teaching Alice through the summer. While many of his friends became pastors or found mission fields overseas, Gallaudet found his mission field at home.[a] The next year Cogswell, with several businessmen and clergy, asked Gallaudet to travel to Europe to study methods for teaching deaf students, especially those of the Braidwood family in England. Gallaudet found the Braidwoods unwilling to share knowledge of their oral communication method and himself financially limited. At the same time, he also was not satisfied that the oral method produced desirable results.

While still in Great Britain, he met Abbé Sicard, head of the Institution Nationale des Sourds-Muets à Paris, and two of its deaf faculty members, Laurent Clerc and Jean Massieu. Sicard invited Gallaudet to Paris to study the school's method of teaching the deaf using manual communication. Impressed with the manual method, Gallaudet studied teaching methodology under Sicard, learning sign language from Massieu and Clerc, who were both highly educated graduates of the school.

Having persuaded Clerc to accompany him, Gallaudet sailed back to America. The two men, with the help of Dr. Cogswell, toured New England and successfully raised private and public funds to fund a school