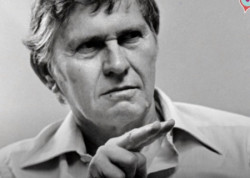 A video to about William Stokoe, often referred to as the "father of ASL".

William C. Stokoe Jr. (/ˈstoʊkiː/ STOH-kee; July 21, 1919 in New Hampshire – April 4, 2000 in Chevy Chase, Maryland) was an American linguist and a long-time professor at Gallaudet University. His research on American Sign Language (ASL) revolutionized the understanding of ASL in the United States and sign languages throughout the world and had a profound impact on deaf culture, deaf education, and sign language teaching and interpreting. Stokoe's work led to a widespread recognition that sign languages are true languages, exhibiting syntax and morphology, and are not mere systems of gesture.